13 Assassins (2 Out of 5 Graves)
First of all, this is a long movie at over two hours. And it has what is a well constructed plot detailed through lots of dialogue (in subtitles), which would be fine, but the wheels turn a bit too slow. It appears to be very accurate in terms of the time period, but it suffers because it becomes difficult to tell good guys from bad guys at times.

This is aggravated by the fact that because its in subtitles, it is hard at times to tell who is saying what, making it even harder to figure out who is who. All the main characters dress in dark clothes, and even when the main “good guy” Shinzaemon gets put in a gray patterned top, it is so quickly covered in blood that its hard to tell which he is.

Ultimately I gave this movie a two because it was long and while the fighting was cool it was the kind that is hard to follow. Lots of super fast swings and tons of people milling about.  In the end, it didn’t make a lot of sense, other than maybe they didn’t want to use firearms to kill their primary target.  Clearly they had the chance about half way through the movie when Naritsugu was halted from taking the quicker route home.

I would have shot him and cut the movie in half. (But it would have been a two for different reasons then I guess) 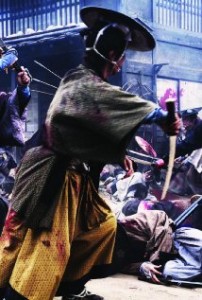