The commercials were awesome, and who couldn’t ask for a better cast of characters for a comedy? And you have the directors of ZOMBIELAND pulling the strings!

First of all, I laughed my ass off on multiple occasions.  The movie was worth the $30 in tickets and the $20 in snacks for three people to head off to the big screen.  Absolutely no regrets there.

The combination of Jesse Eisenberg and Aziz Ansari kept me laughing throughout.  They hit the mark consistently, both of them showing off thier comedy timing and delivery.  More of them would have been great.

Where things fell apart just a bit was with the combination of Nick Swardson and Danny McBride. I have found them both funny in other rolls, and was routing for a big showing for Nick in particular.  He has made me laugh in Reno 911 and as the crazy brother in Benchwarmers so much I route for him to have a huge hit.  But sadly, the two “evil” characters just don’t hit the ball as consistently as Jesse and Aziz.  There are long strings of riffing between Nick and Danny that I chuckled at, but it was more out of respect than anything else.

I would have tightened up their scenes, fired a few writers, or cut a few riffs out completely, and this movie would have hit a 4 versus a 3. 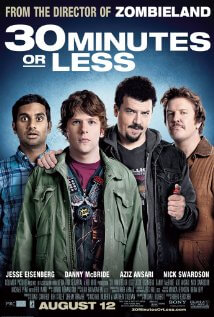