This was another of those movies that I was really excited to see. The ads looked awesome, and the premise seemed to supply plenty of opportunities for awesome action.

True to its promise, it starts out at a boil but then cools off.  I think the director got caught up in the artistic, need to humanize the main character trap, and instead of giving us a view of her humanity, he destroyed the character.

Her father has been training her to kill since she was a toddler. She is fearless and strong, trained by a master of his trade, but she blurts out critical details of her plan to hapless bystanders, and makes several stupid mistakes.

The movie tries to be brutal, but then shies away at being truly brutal.  I’m not saying that would have made the movie better, but it felt a bit schizophrenic.  Its Chloe Grace Moretz as a “Kick Ass” teenager, its a touchy feely movie about Hanna’s self realization, and its a cautionary tale about seeking revenge at any cost.

Balancing those things out is a hard thing to do.  The movie was enjoyable, but it was a low three.  At least it was better than Sucker Punch… 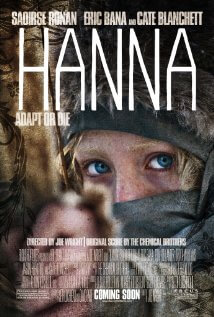