Okay, so before you come to my house with pitchforks and torches, lets start with a definition.

Sexism, also known as gender discrimination or sex discrimination, is the application of the belief or attitude that there are characteristics implicit to one’s gender that indirectly affect one’s abilities in unrelated areas. It is a form of discrimination or devaluation based on a person’s sex, with such attitudes being based on beliefs in traditional stereotypes of gender roles. The term sexism is most often used in relation with discrimination against women,within the context of patriarchy.

Sexism involves hatred of, or prejudice towards a gender as a whole or the blind application of gender stereotypes. Sexism is often associated with gender-supremacy arguments.

The key point of understanding is really in the first line. “is the application of the belief or attitude that there are characteristics implicit to one’s gender that indirectly affect one’s abilities in unreleated areas.”

Its not sexist to have a girls team for sports because in general men have more muscle mass and can hit harder.  Therefore, seperating sports by gender does not fit the bill of sexism.

So now lets get to the meat of the discussion.  I think there will be less female survivors than male. Let’s look at some basic facts that I’m basing my argument on.

Point 1: Violence is inherent to the male gender:

I’m not saying I’m proud of it. Violence is wrong in a civilized society. But the point blank fact is that men have more capacity for violence and will therefore be able to adapt and survive better when violence is the only thing that will keep you alive in those first days of the change, when our world is being consumed.

Point 2: Law Enforcement is Dominated by the Male Gender 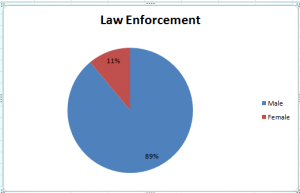 Only 11% of officers on average are female. While law enforcement has a low survival rate in those early days, they are also the people who have guns and know how to use them. If you look at the military, it actually slightly more, about 20% female, but they tend to be in support and non-combat roles for obvious reasons.

Conclusion: Being female reduces your survival chances when the undead start to eat your neighbors. Obviously, because you are now better informed you can do a few things to improve your individual odds if you are female. Start to work out, get a gun and learn how to use it.  You should be running at least 8 miles a week and shooting at least a hundred rounds a month.

Be prepared and watch for the early signs.  When small towns start to get wiped out and the news is spinning “Infection”, “Social Unrest”, “Riots”, it is time to get your Bug Out Bag and get out of town.