Sometimes you get a great surprise. I’d count Stake Land as one of those.  I’d somehow missed it when it came out and was pleasantly surprised when my brother brought it over last night.

The opening scene is brutal and sets the tone for a very graphic but well laid out movie. The main characters play their parts very well, and the brutality of loss is built up so well you can feel the sadness and detachement growing in each of the characters.

My one complaint would be the ending. It was both classically satisfying in that it was open enough to allow interpretation, and yet a little off kilter for Nick Damici’s character of Mister. Throughout the movie he’s protecting and training Connor Paolo’s lead role as Martin, building him up slowly, making him into another hunter.

But at the same time, their journey is always taking them closer to New Eden.  I won’t ruin the ending, but let me know if you thought it made total sense?  I’m not really sure what the director was going for with Mister’s last action?

Even having said that, it was a great movie. 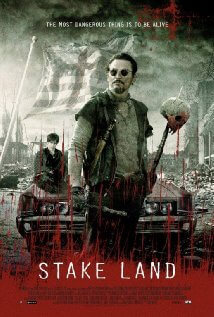