So a friend of mine at the local college wanted to offer me a deal.  They had twenty five Uvex model S8510 full face shields from the chemistry department and they were willing to sell them in bulk for $18 dollars a piece.

Knowing my love of stockpiling survival gear, I was of course his first call.  I was able to pick one of the units up before the long weekend started and told him I’d let him know if I was interested in the lot. 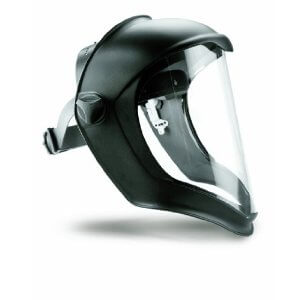 As a comparison to see if the chemistry face masks were worth buying I decided to compare it against a surplus Israeli M15 gas mask.  I’ve been able to find these used for twenty bucks so I’m going to use it as a control as I already have a few in the house. 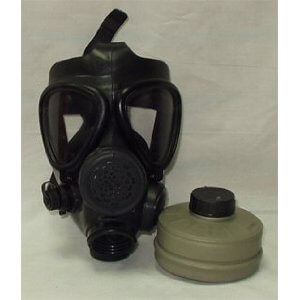 Weight…The first thing I noticed as I tried the two pieces of equipment on was weight.  The Uvex model is much lighter than the gas mask.  I took the filter off the M15 to see if that helped, and it did a little, but the Uvex is still lighter.

Field of View…The M15 has much smaller ports for viewing than the full face shield, but they are about equal once you are used to wearing it.  I would compare it to wearing glasses, once you wear them for a while you no longer see the edges of them in your peripheral vision.

Fogging…This is where we really see a big difference between these two budget pieces of equipment.  The Uvex fogs fairly quickly once your out jogging in the woods on a humid day.  It fogged so bad I had to stop and take it off after running squarely into a tree. not having a separate breathing feed really hurt the Uvex here.  The M15 was hot, but only fogged up after heavy use and only enough to be annoying, I could still see.  Having my breath going through the mask ports was a huge benefit here. <sarcasm> Who would have imaged an Israeli gas mask functioned well in the warm weather? </sarcasm>

Blood Resistance…This is the final and most important category and I’ll grade blood resistance with two scenarios.  Scenario one is from the movie 28 Days later where the bird lets a single drop of blood fall as Frank (Brendan Gleeson) and infects him.  Both of these masks do just fine in the small splash category.  The second scenario involves buckets of blood.  This is where the two really stand apart.  If you get hit with more than a few drops your going to want the M15.  The Uvex was designed for lab situations where your most likely going to be facing the source of your splash in a controlled environment.  It wasn’t really designed to keep fluids from running down through your hair and getting into your eyes.  Any quantity of liquid or semi liquid goo will eventually seep in from above with the Uvex mask.  This is in stark contrast to the gas mask which was designed to keep contaminates away from your eyes and mouth. I could bathe in undead bits and as long as I took a decontamination shower afterwards I would feel safe.

So, for my sub twenty bucks I’ll stick with used military grade equipment.  The Uvex would do okay in a pinch, but I wouldn’t pick it over an M15 mask if I had the option. I know some people will say the Uvex is also better because you don’t need the filter box, but we don’t really need the filter for the M25 either, we are just using the mask for the face seal and the proection.  I’ll post soon about how to replace the filters.  Its not going to function as a gas mask, but we don’t really need it for that in these scenarios.

In Summary…Spend the extra two bucks in this used gear price range and get the mask that will help you stay alive.