For the third of my 25 Undead Christmas presents I want a pair of Walther P99s in .40 Caliber and a double shoulder rig.

When your walking down the street, salvaging what you can from nearby houses and cars, and you don’t notice the shambling horde approaching until its too late your going to need to punch a hole through them and escape.  You need the reliability the Walther P99 provides as well as the acurracy and stopping power the .40 caliber round will give you.

Don’t risk your life on your weapon jamming or running out of rounds.  It’s a little extra weight, but the trade off in having a back up is worth it.

Why the .40 caliber versus say, the 9mm? For the same reason most police departments have moved away from the 9mm – stopping power.

After multiple issues with being able to stop a target when its hit, even the poorest police departments have adopted the .40 round. So, when the undead sh*t hits the fan, what type of rounds are you going to find in the trunks of police cruisers and stocked on departments shelves? Yep, the .40 caliber round.

And of course, there is nothing like the Hornady Zombie Max rounds in .40 caliber: 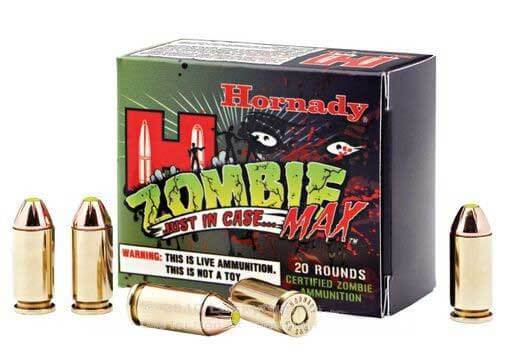