So what makes a people move from the plains into cliff dwellings set high up on ridges? 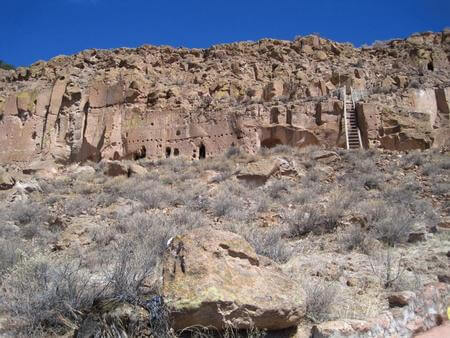 Most archaeologists agree the move was caused by a significant shift in the local Indians need to be secure.  What else could have caused them to move away from their villages and fields and move further from the resources they required to survive? One theory is that the cliff dwellers had actually given up on living off the land, and had actually become the predators, raiding other villages for their resources.  As the predators they used the cliff dwellings to keep the other tribes from hunting them down and putting an end to their nefarious deeds.

The problem with that scenario is that  there is no evidence of in the record of either large scale raiding and or people ever moving against the cliff dwellers.  So what could have caused a whole culture of people to move into the mountains with such restricted approaches and hard to access dwellings?  Many of the dwellings are only accessible by climbing up small hand and foot holds and have very restricted openings.  Clearly these people were taking a defensive posture.

Fact 1…Scientists have found evidence of cannibalism. Evidence is shown by teeth marks on bones and by fossilized evidence of human tissue in the stomachs of the dead.

Fact 2…Archaeologists found evidence that when Sand Canyon was finally abandoned in the thirteenth century, the kivas were burned. Kivas were sacred ceremonial places; they would not have been systematically burned without cause. Many archaeologists believe the kivas were ceremonially burned, possibly as a way to “close” the kivas when people left. The Anasazi very likely did this because they never intended to return. Another important clue is that, at Sand Canyon, people left almost all their possessions rather than taking them. The Anasazi likely had a long and difficult journey ahead of them.

These people weren’t fighting over resources or warring over water.  They were fighting off the undead who came stumbling in from the desert villages. Bodies found with teeth marks on their bones.  Other bodies found with human proteins in their guts.  And maybe most imporantly, the dead were left where they were killed.  The normal burial rights for these individuals were skipped.  No one wanted to touch those bodies.

Who burns all thier belongings in thier dwellings?  The cliff dwelling Anasazi were trying to rid themselves of the undead devils plaguing them before it was too late.  But unfortunately for them, they were overrun, and only a few of their people made it out of the canyons to join other villages.

Luckily for us, the undead were contained by the desert and the relatively large land mass the infection took hold in.