Warriors Way has a simple and alluring storyline. The master swordsman destroys the last of his enemies clan except for a baby girl. Right before he is about to take her life she smiles at a flower petal blowing across his face, and the emptiness inside him is pushed away for just a moment.

This is how the saga begins. After saving the child he becomes the enemy of his own clan, and his old master hunts him down as he flees to the small town of Lode in the west. The directors pulls together neat little flashbacks giving a rich backstory, explaining why each character is the way they are.

The graphics are great, the actors are good.  If anything Kate Bosworth is almost too cute as the female lead, making it hard to believe that Jang Dong Gun’s character wouldn’t have taken her up on her not so veiled offer to “take me for a spin”.

In the end, the movie tries to mix just a few too many genres together. Its a spegheti western, a samuri movie, and an anime all mixed together.

I wouldn’t pay retail for it but if it was on late and night and I had nothing else to do, I would leave it on to see how it plays out. 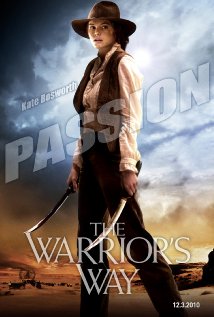