Thank you to Yuri for sending me this very strange picture.

He tells me he was going to university just outside of Moscow.  The dorm building was an old military building converted after the cold war ended. Rumors abounded about the noises from the basement.

Right up until Vladmire was pulled down into the toilet and eaten.

State run TV blamed a severe case of gastric distress for his death.  They never explained the bite marks.

Thanks for the news out of Russia Yuri. 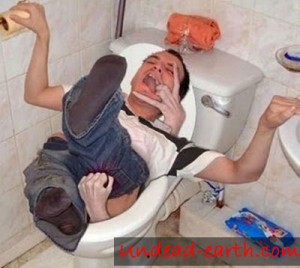