So I made the mistake of thinking I was talking to a mature adult today.  What a mistake.  Never bring up politics with “friends”.  The only reason I thought this was acceptable was that we’d talked about politics before, and even had discussed that we could say whatever we wanted, as long as we could back it up with publicly available data, preferably from the CBO.

However, when I challanged him on some amazing facts, his only recourse was getting louder and louder. When I offered to put a grand on the table he flipped out and got REALLY loud.  I should have known, typical right wing nut, when faced with facts they get angry and start yelling.

Statement 1: Bush’s Tax Cuts didn’t add to the debt, they were self funded. And Obama’s policies have added way more to the defiicit.

My Reaction: Holy f*cking sh*t. I should just walk away, this guy is a stupid *ass.

Statement 1 Reality: Bush’s tax cuts had huge impacts, and they were long lasting.

“What’s also important, but not evident, on this chart is that Obama’s major expenses were temporary — the stimulus is over now — while Bush’s were, effectively, recurring. The Bush tax cuts didn’t just lower revenue for 10 years. It’s clear now that they lowered it indefinitely, which means this chart is understating their true cost. Similarly, the Medicare drug benefit is costing money on perpetuity, not just for two or three years. And Boehner, Ryan and others voted for these laws and, in some cases, helped to craft and pass them.” 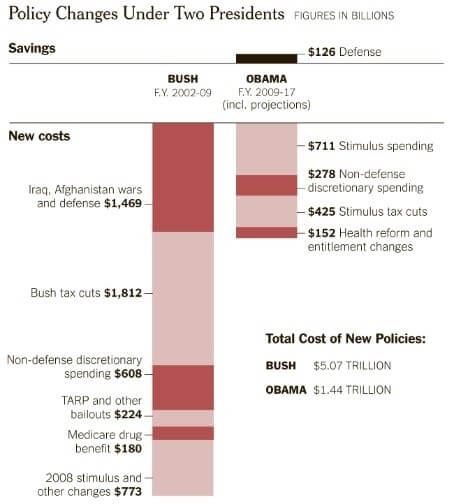