In Time has an interesting concept.  People age until they are twenty-five and then a timer starts, giving them one year to live.  They can work to earn more time, or steal it from those weaker than them, but like with most things of value, the system is built to favor the rich and powerful, placing ever more power in thier hands.

The world is broken up into time zones which create physical barriers to keep the rich and poor separated.  Those with time, and those without.

The movie points out without much subtlety how the system is rigged to make sure the poor stay that way.  I hope the 99% are paying attention.

Overall, it was an enjoyable movie.  Justin Timberlake is starting to earn his chops as an action star, and the movie is novel enough to keep it interesting. 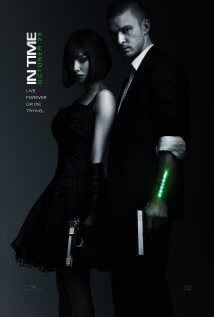