We have three branches of government for a reason. A President is not a king. Trump can’t just decide to change what Congress approved, and any Congress that would let him deserves to be thrown out.

Trump broke the law, Trump obstructed Justice trying to hide that fact, and now Mitch McConnell is going to do his best to let Trump get away with it.

On top of lying about being for the Middle Class, and then giving a tax cut that only helps the super rich while ballooning the deficit, Trump also promised to make our healthcare system cheaper and better.

Instead, I’ve spent more this year than ever before on healthcare, and more children are uninsured.

Is there anything that Trump didn’t lie about? 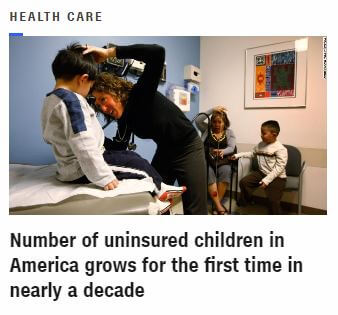 Trump has run multiple companies into the ground because of his fiscal policies.

It sure looks like he wants to do the same thing to the U.S. economy as well.

Save our country. Vote out anyone who supports Trump. The stock market is going down and our trade partners are bringing out the long knives.

Trump has had multiple bankruptcies, and now he’s trying to destroy the US economy just like he did his own companies.

Putin must be incredibly happy with his pick for the US president. Wow, what a huge nothing burger that Trump has endorsed all along.

Let’s vote out this Weak On Russia Congress and get people in there who will fight for us!!! Trump considers anyone who doesn’t stand in the way of normal due process as a traitor to him personally. He doesn’t care about the rule of law. He doesn’t care if he broke or is breaking the law – because he absolutely believes he is above anything that would impact one of us normal people.

Trump thinks he is our ruler, he has no concept of what it means to be a servant of the people.

Anyone who puts their party over their country is a traitor.

Vote out anyone who supports Trump, save our country. Does anyone believe this?

I should have gone running for another candidate when the “Grab em by the p*ssy” comment hit, but I was blinded by the bullshit.

Now we know what a disgusting man Trump really is. Cheating on his wife, who just had his baby, and then paying her for her silence.

Anyone who supports Trump, or who has supported Trump has to be voted out.

The country must come before the party. When will the Poor & Middle class take a few minutes and realize that Trump has turned on us?

Trump is giving a huge tax cut to the super wealthy on our backs. He’s not for the little guy – he’s for his rich buddies. Why is Trump so weak on Russia?

What does Putin have on Trump?

I don’t know what it is, but I have this feeling its not good for all of us.