, and the first half of Season 3

. They are well worth seeing.

Episode 2 kicks off with a flashback of Derek and Peter in highschool. Derek is having trouble controlling himself and Peter is trying to help him with some unknown control object.

Flash back to current time and we see Kate Argent in a gas station bathroom, struggling to control the wolf – and failing. The poor gas station attendant gets eaten.

At Dr. Deaton’s office the team leaves Lydia and the Dr. with a sleeping young Derek who of course wakes up and punches Deaton before running for it. Team wolf isn’t sure what to do with Derek. Unfortunately, the police find Derek at his houses demolition site before the friendlies can and Derek gets tazed and taken into custody. Of course the cops run his fingerprints and can’t figure out the young man sitting there with old Derek’s face on the computer.

Scott & Stiles convince Sheriff Stilinski to let them take custody of Young Derek while Kira and Lydia find the body that Kate Argent left in the gas station bathroom.

The big question is whether Malia is hot or not. Sometimes she looks awesome, and other times I’m not quite as taken.

Malia meets up with Scott to give him backup when he goes to meets Peter. I think Peter knows she is her daugher, but she doesn’t know he’s her dad. (very confusing) And Peter has the key to understanding what Kate is doing. She took Derek back to an age when she and he were lovers so he will still trust her.  Which takes us back to the opening scene where a young Derek was using some object of power to help control his changes. This is what Kate is after. The best part is that when Kate finally gets her hands on it Peter is there to tell her it is just a cheap symbol to focus on, and had no real power.

As Kate and Derek sneak into an underground liar beneath the school Scott, Peter, and Malia face off with Berserkers, the same things that hurt Malia in Mexico.

Outside the Berserkers kick some Scott ass (huge shock) and Kira tries to save the day with her sword but quickly gets disarmed. Thankfully Young Derek had to respond to Scott’s Alpha call and Derek at least can almost win a fight now and then. He at least fights the Berserkers to a halt until the hunters call them off. (Or someone did.)

Meanwhile, downstairs in the vault Peter and Kate are gassed and someone steals a briefcase full of $117 Million dollars in bearer bonds.

And Derek is back! With gold eyes. I guess being made young takes away your guilt for killing as a wolf.

You can do it, you can make it through another Monday!

No doubt the most well done firearms PSA ever.  And with a message everyone should hear.

I feel so lucky I have 2.5 boys. I don’t have to “worry” about some of the things that you do when you have girls.

I don’t live where alligators can live in the local water, so I don’t know a lot about them, but this just seems like an unwise move? Do they always come at you on the top of the water?

He might not be the best husband, but he kicked ass as a president.
The economy was awesome, we were perceived as strong.

And he is so right. We wasted American lives and treasure over a bullshit war, and now the people who started it have the balls to complain about complications from their mistake.

is one of my all time favorite books. I read the short story in the school library and devoured the book when it came out. I’ve since read it multiple times.

The always say the movie is not as good as the book but in this case it is pretty damn close. They picked a perfect Ender, and they nailed the Combat Schools scenes.

And one of the real keys to making the movie work is picking the correct Valentine, which they nailed as well.

If you haven’t seen the movie

, you should, if you haven’t read the book

Reincarnation or neurons firing all a-muck in little kid? 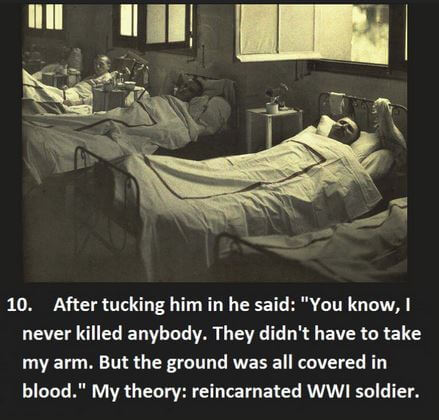 Read the Best New Apocalypse Series of the year!
Can Daniel and Justine survive the apocalypse? And can Daniel survive Justine?