What does every corner of your lodge need during the ZA? That’s right, a Corner Magnetic Gun Rack

loaded up with shotguns and rifles – because you just never know where you’ll be in the house when the undead come crashing through your outer defenses in a thick horde.

Of course I wouldn’t leave weapons in them until after the zombies start eating people – but this Corner Magnetic Gun Rack also works well in your hunting lodge or cabin when you come back to grab lunch or crash for the night before going back out in the morning.

I’d say that is about right. Every Monday feels to be about 1408 hours long… 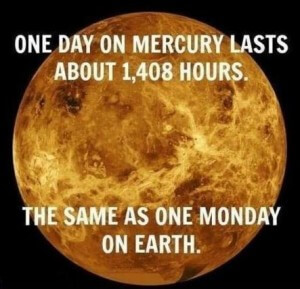 is here and kicks off with Jessie’s son drawing in his room – still to scared to come downstairs. He’s left a cookie on a plate and the ants are invading – just like the undead are about to do.

We quickly cut to commercial and when we come back the steeple is falling and the undead begin rushing into town. All hell breaks lose as Team Rick and the other Alexandria survivors fight for their lives.

Maggie is swarmed and ust makes it up a ladder before the horde pulls her down. As she is lying on the top of roof she barely made it to she see’s Glenn’s balloons floating overhead. 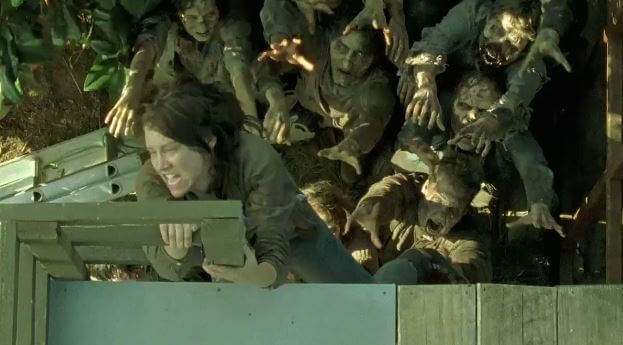 Outside the wall Glenn tells Enid they need to get to the west wall – that is how they will get in. Enid basically tells him it does’t matter, this is how it will always be. The undead will come. 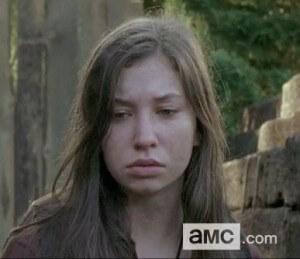 Glenn tells her they have people in there, his pregnant wife is in there. He tells her they can make it different before they make a break for the west wall.

While everyone else if fighting for their lives the shy doctor is locked in the basement with the injured Wolf while Morgan & Carol hide out upstairs. Carol wants to kill the wolf but Morgan doesn’t want to let her. There is a brief fight and Carol goes down. The distraction is just what the wolf needed to knock Morgan out and take his knife. The shy doctor begs the wolf to just let them die. He’s about to kill the doctor when Team Tara shows up – and promptly hand over their guns. The wolf takes Tara’s gun and flees out the door with the doctor.

Inside the house Michonne finds that Deanna has been bitten. Her time is limited. Rick tells Jessie that once the horde settles down they will congregate and he’ll make a run for the armory. Once there he will try and pull the horde away.

While Rick & Jessie are discussing how they are going to survive her son is trying to kill Carl, and bringing the horde down on the process. Instead of telling his father what really happened Carl tells Jessie & Rick they were looking for tools when the horde attacked – then he draws on the kid and tell him to give him the gun or he is going to shoot him.

When Rick goes upstairs he finds Deanna hanging on Judith’s crib and almost puts a machete into the back of her head before she tells him “It’s still me!” I almost think it would have been kinder if he just killed her. 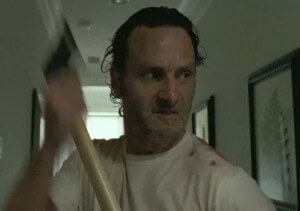 Downstairs the horde is starting to push through. Rick comes back just in time to lose the first floor. Everyone flees back up the stairs as Rick tries to slow the press of undead down with a sofa. Rick goes back to the early days. They are going to cover themselves in zombie guts and walk to the armory. Michonne offers to end Deanna’s life, but she isn’t ready. She has her pistol and will end it when its time. Team rick covers themselves in sheets and then douses their bodies with zombie guts – just in time for Jessie’s youngest son to stumble in and freak out while his mom tell hims to pretend to be brave. Team Rick covers themselves in zombie gore and begins to make their trek out of the house. Upstairs Deanna uses her last moments to use up her last several rounds.

The mid season finally leaves us hanging on multiple fronts. Glenn and Enid climb over the wall and see Maggie trapped on the lookout post along the wall while Team Rick is trying to make their way through the zombie horde covered in undead guts just as Jessie’s youngest starts saying “Mom, Mom,” over and over again.

So I’m about to be out of work for five to six weeks because of back surgery. I’ve got a piece of bone and a herniated disc pushing on my L4/L5 so they are going to go back in and remove both. Right now my iTunes is on a massive rig that is quite loud to run and even though its in another room from my Apple TV I don’t like leaving it on all the time. So to try and prepare for my surgery I decided to get two new pieces of equipment. One was this WD 6TB My Cloud

and the other was a Dell Inspiron 3000 Micro Desktop

which I’ll be covering in a separate post over the next few days.

Let’s start with the setup. The WD My Cloud

installation was a breeze. Plug it into power and my router and I could see the drive on my network as a Media Device and as a Storage Device. The very first thing I did was update the drive to use a static IP. Based on other reviews of the drive it seemed like the obvious first step in terms of configuring it.

This is where my problems started. I have four desktop PC’s in my office and two laptops. All my machines are Windows 10 Pro. On two of them I could map a drive and browse to the WD My Cloud

and create mapped drives without a problem. The others PCs – even though I looked and their configurations appear to be the same just can’t find the NAS. (Both the below are PCs that were on – but no WD MyCloud.) 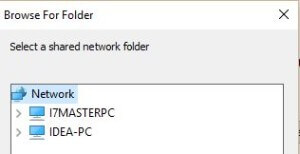 I read about ten posts from others having the same issue. None of the fixes the others tried worked for me on those PCs. The only thing that did was downloading the Western Digital Discovery Software from their support site. This allowed me to map drives on the two PCs that couldn’t browse to the drive.

After that my other PCs couldn’t find it either – so I had to use the Discovery Software on those as well to add mapped drives I hadn’t already created. I find it very strange that a PC that could see the drive stopped being able to find it when I didn’t directly change any settings on that computer. To me this means something changed on the WD My Cloud

. I’m glad they distribute the Discovery Software but it is aggravating that they need to do this.

Step 2 for me was to copy over all my iTunes media to the drive. I started with movies. 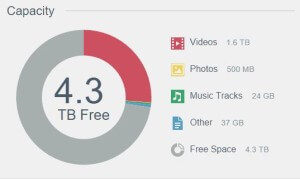 Everything copied over fine. The only issue I had was that the drive isn’t just storing the data – it is also indexing it and managing it, which sounds great, but then I noticed that it was constantly scanning the contents. 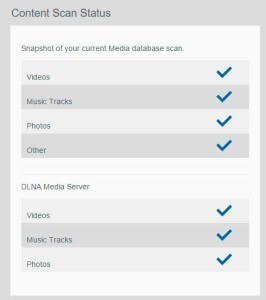 After reading and looking at other users with the same issue I updated the firmware (which was easy to do as it was all in the UI) and then updated a few settings. I’m not actually sure which of the changes let the scans complete, but this is what I did.

Update: When I first wrote this I was looking mainly at the drive and wasn’t actually watching media on Itunes that was hosted on the drive. I found out that the DLNA Media Server killed performance and make Itunes so laggy Apple TV kept dropping the connection. To fix this I turned off DLNA and the issue was fixed. 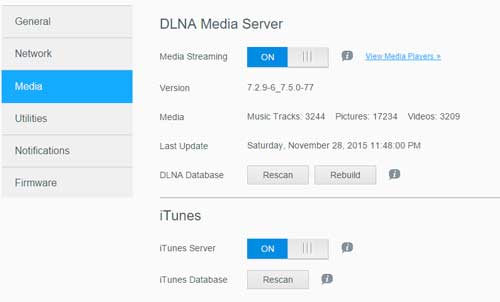 When I woke up the next day the drive had finally finished processing my data and everything looked good from the NAS side.

In the end the scanning and the mapped drives were a bit of a pain to figure out. I am keeping the drive so it wasn’t so bad that I wanted to return it. I’d giving it a 3/5 as I do feel like it took more time than it should have. The flip side is that I got the drive on sale and I do feel that because I basically got a new 6TB drive for $149 on sale I did still get a good value. If I’d paid full retail I would have been a lot more pissed.

which will run the actual iTunes software to share the media with my Apple Tvs.

Do you live in a relatively flat location? Do you want to be able to shoot over your defensive wall post ZA? Thanks to this dual purpose 13′ Deluxe Tripod Deer Stand

is the perfect solution to solve all you hunting and ZA wall defense options.

That is one tough clown.

It will never cease to amaze me how the masses vote out of fear and against their own best interests because the right is so good at feeding them xenophobic fear and bullshit.

is the perfect security/hunting companion. It was intended to be used to alert you to deer or other game approaching from your blind spot – which it does very well – but it can also be used to guard your six during the ZA. It uses 3 AAA batteries and has a range between the sensor and the receiver of up to 300 feet so you can use it to guard the fire escape or the front door while you hold out on the roof.

For when you just positively have to keep the zombie hoard from crossing the road – lots and lots of mines.