So you’ve spent a few days clearing the grass back and it is still cold enough to see your breath in the morning. So it’s the perfect time to start planning for next winter. You can never have enough firewood, and while a chainsaw would be a blessing, it won’t last forever, so you better have a backup plan like this Two-Man Crosscut Saw

. It does take two people, but it makes bucking logs so much easier than using a single person saw.

And no, I’m not kidding. As soon as you can safely work outside its time to start pushing the trees further away from your house to make a larger killing field, and then you need to turn them into firewood. My suggestion is to go after six to eight inch trees for firewood, it makes bucking them (cutting them in short enough lengths to put in your stove) so much easier. There is a diminishing return on investment once the logs get too big. They are harder to move, less safe to work worth, and their yield compared to the effort isn’t worth it.

So get to work cutting down trees with your trusty Woodsman Axe  (Day 16) and then start bucking. That firewood isn’t going to cut itself.

You’ll hate me while you are sweating. You’ll love me when your snowed in and not freezing to death come winter.

Heights don’t freak me out but the idea of forgetting where I was and going for a pee that ends up killing me does. 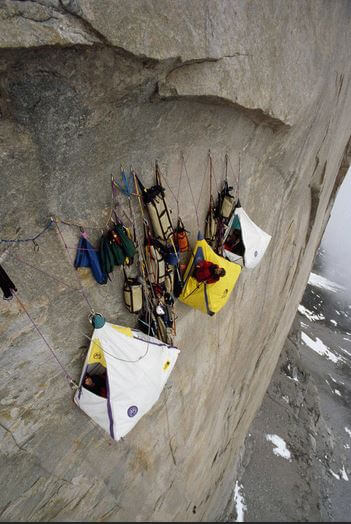 I promise she’ll be faster with practice.

The Republicans want nothing more than to do away with the middle class and make us slaves to the top 1%.

My grandfather raised a family of five bought a house on the wages of a roofer. Now you can work ten hours shifts six days a week and not be able to support yourself in the same job – while investment bankers pay 15% of their wages in taxes and big corporations pay nothing.

How is that fair?

How dare you vote red unless you’ve got millions/billions in the bank. 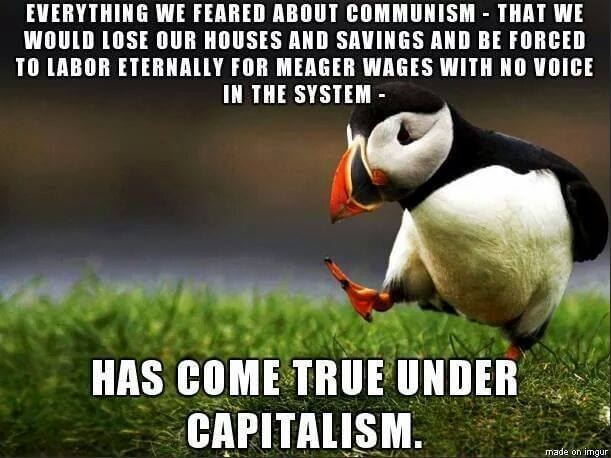 Contrary to what you see on The Walking Dead the grass doesn’t mow (NSFW) itself. And just take a drive around and look at some of those houses that have been owned by the bank for a few months. It looks pretty bad. I’ve seen grass up to my waist. And that means someone or something could use that cover to sneak up on you. What are you going to do use valuable gas to start our mower? Not only is that a waste of a valuable resource but you will also announce to anything nearby that our are there. So make sure you have a Scythe

and Handle so you can clear the grass as it grows up around your home.

I’d make sure to cut it back at least fifty feet. You want enough room to have a clear killing ground which is important with the undead as well as the living. And using a Scythe

is also a great workout. Which is important, because if you need to swing a hammer or a machete you want to make sure you have a good amount of upper body strength.

All I want to do when you wake me up on Monday morning.

I don’t know how much it costs (and I’m guessing a lot) but I want one. It doesn’t even have a lot of practicality, but still, I want one. 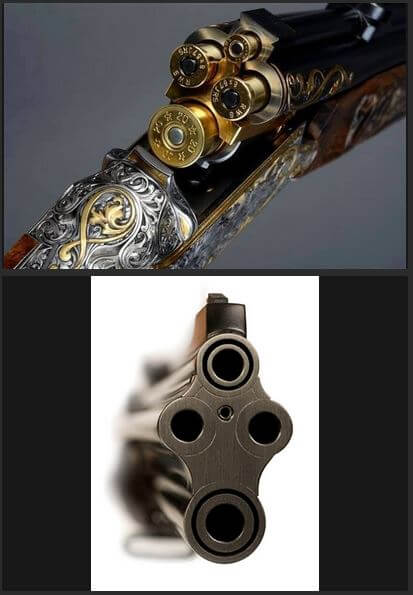 The season finale starts with Morgan sleeping in a car out in the woods.  After a full season of teasing us with his whereabouts we finally get more than just a glimpse of him. Just as he’s making some hot chocolate a strange dude with a “W” on his head comes and interrupts his breakfast and tells him not to drink his coco. He tells Morgan that they have been hunting other survivors, and he wants everything that Morgan has. Every last drop. Morgan tells the fellow he can have all his supplies, but he can’t allow him to take him away. The W dude tells him to just be still, right up until another member of Team W comes out with a knife from behind him. Morgan proceeds to take them both apart with his quarter staff and then sticks them in the back seat of his sleeping car before honking the horn and taking the rabbits foot from the rear view.

This interaction tell us a critical bit about who is going to try and take down Rick’s new town. Team W is out there and they want to take what you’ve got. I wonder how long before they attack town?

When we come back from commercial break we see Daryl and Eric stopping on the road briefly before cutting back to town where Rick wakes up under guard with Michonne watching him. Rosita has pached up all his wounds and he’s covered in butterfly bandages.

She is mad that Rick didn’t pull her in from the start on the Pete situation.

Carol, Glen, and Abraham come in Carol tells Rick to tell the townspeople whatever they want to hear. If things go bad Rick wants to take the three town leaders hostage. Glenn is afraid they are turning into the people of Team Terminus. I’m not sure if everyone is still on Rick’s side.

Maggie goes to Deanna and tells her not to let the town decide or not to decide to throw Rick out. Deanna is naive and is afraid because Rick pointed a gun at people. Deanna’s husband seems to be more reasonable but I’m scared this is going to push Rick to the dark side. 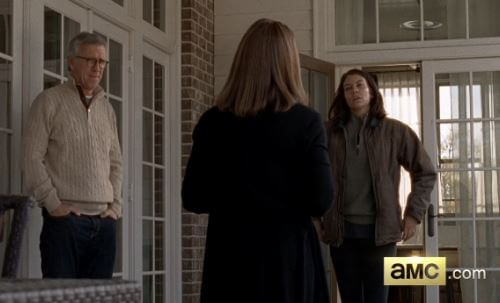 Things in the town are getting tense. Maggie knows that Deanna already has her mind set. Glenn is sad, he thinks it is going to turn violent. Then I think he sees the guy who got Noah killed going over the fence. Going to talk to Team W? And of course Glenn follows the guy out into the woods and quickly gets shot. There is a brief and brutal fight and then we are left hanging as a horde of walkers falls on Glenn. We are left hanging, thinking Glenn is dead – right until he comes barreling out of the night to tackle the dude and beat him. Glenn puts a gun to the dudes head but can’t pull the trigger.

Which is also just about the time that Father Gabriel decides to go for a suicide walk. He goes out to find a walker and finds one, telling the thing “I’m ready.” When he goes back to town the idiot on the gate let’s Gabriel in and then lets the fool priest leave the gate open. I guess its going to be an interesting town meeting.

Daryl and Eric were tracking someone but lost them at what looks like a shipping depot or food cannery. They think they are going to make it out with a truck full of canned goods but what they get instead is a booby trap that releases a horde out of the trucks. Which leads to the awesome triple whip kill which Daryl lands.

They fight there way to the parking lot and flee into a car where they find a creepy note. Others have been stuck in the care before them. Eric tells Daryl he was right, they should have kept looking for the kid in the poncho. Daryl tells Eric he’ll lead them off so Eric can make a run for the fence. Eric tells him no, they fight together and if they have to they die together. Just when you think hope is lost Morgan comes to save the day!

Back in town Carol delivers something to Pete’s new house and gives him a dose of reality. He can play ball or Carol will make him pay. I wish she had killed him. Right after Carol leaves Rick goes to visit Jesse and of course Pete can see them talking on the front porch from his window.

Rick and Michonne kind of make up just before the meeting and as he’s leaving his house he see’s the gate is open, and when he shuts it he sees a blood trail. (My fear is that Peter killed Jesse and it is going to push Rick into a rage.)

Father Gabriel comes back from his crazy walk to find Sasha in his church. She asks if he can help her and he tells her no very brutally. Sasha tells the father she wants to die and Gabriel tells her she deserves to die for what she’s done.

Then it is time for the town meeting to start, but Rick is running along the wall, trying to figure out where the blood trail came from. (Thankfully we did get to see Jesse at the the meeting though, so we know she’s alive.) Rick is running through town when he gets attacked by a walker. As he’s fighting for the town Michonne is telling them he’s a good person, that they need him. All the while Rick is fighting and killing a walker. Of course Deanna tells everyone Gabriel told her that Team Rick can’t be trusted. Just as they thinking about kicking Rick out he shows up with the body of a walker on his shoulder. He tells them they need to be strong, that the dead and the living will always try to get in. They the people and undead outside the walls will try to kill them. Rick gives them some tough love and tells them they need to be harder. They need to start to get ready for what’s coming.

Just then Pete shows up and accidentally cuts the mayor’s husbands throat. Deanna looks at Rick and tells him to do it. Rick shoots Pete and then Morgan says hi, a look of horrible surprise on his face.

The last thing we see from inside the town is Michonne about to put her sword above the fireplace then deciding to put it back on.

Then the very last thing we see is the people at the depot as the shot pans out, showing something painted on the car. I think its something about wolves?

The weather is growing warm and that means its time to start scavenging and hunting in earnest. You need to stockpile enough food and supplies to last you through next winter, because who wants to trudge miles in the snow for a backpack of canned goods? By the time you get them and come back you’ve burnt more calories than you found. So its time to get out there and take care of business. So you’re going to need these Brush Pants

. They are water repellent, reinforced with nylon in high wear areas and are still breathable.

And I love their bit of advertising:

. Marching through the much while killing the Undead with abandon.