Zombie blood is slippery stuff. If it wasn’t so infectious it would be perfect to lubricate your slip and slide. Of course that means you are also at risk of seeing your Framing (Day 207) go flying out of your hand. Want to keep that from happening? These Reinforced Tactical Shooting Gloves are the answer. They protect your hands from all the little scratches and bumps the ZA will dish out while also making sure you have a firm grip on that shotgun as you crush a zombies skull.

I always have a hard time finding a pair of shooting gloves that fit me well. They have to be tight and snug, but not too much so. It’s kind of like the Princes & The Pea but I’m actually pickier than she is. So the first time I put on these Reinforced Tactical Shooting Gloves I was super psyched that I didn’t have to pop any seems and re-stitch anything to get make them fit me the way I wanted.

Try a pair out, I wear mine doing everything from busting clays to shooting handguns. And while they aren’t a heavy winter glove, they do keep me warm as the weather gets colder and I’m walking around the clay stations.

You can take anything too far.

In all seriousness. This is really unsafe. That weapon could rust. 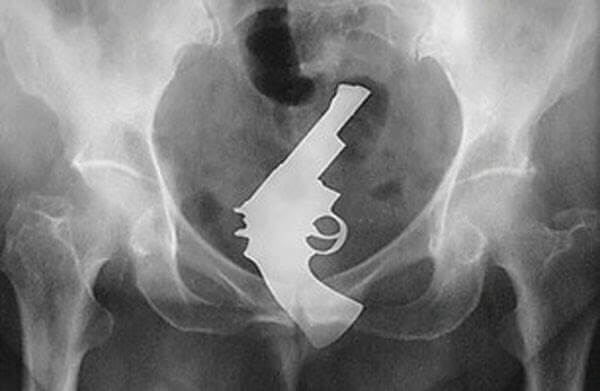 OMG, it just hit me that we are the Zombies. And we are eating out planet alive. 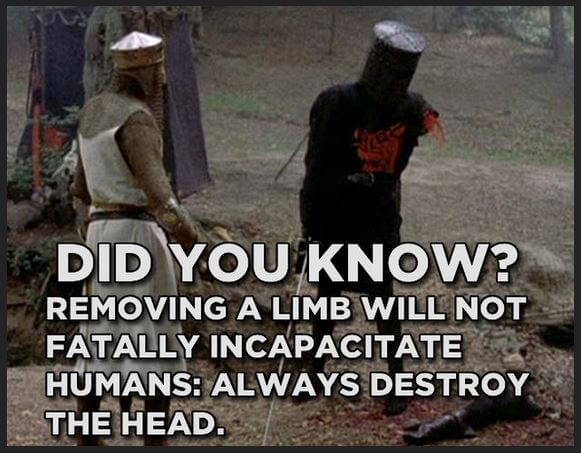 Make sure you have a few bottles of propane on hand to feed this Bottle Top Propane Stove. It’s a great little bit of gear to warm you up on those cold days sitting watch when you can’t get back to camp for a warm cup of tea. It’s also a great survival tool if your stuck inside a cold house waiting for the ZA to die down a bit.

Keep plinking. Then move up to rifles and shotguns.

That will put you on My Team. 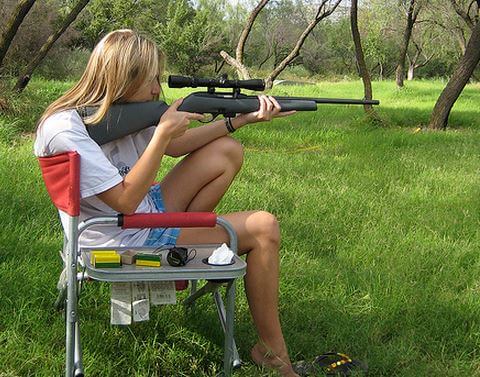 This is what happens when you break up with a female sniper. You just never know what she’s going to do.

It’s not enough to be secure from the undead. You need to keep watch for the living as well. And eat. And go the bathroom in private. Which makes this Tree Stand Blind

the perfect addition to your tree stand. Watch for the horde. Watch for people passing by on the road so you can decide whether to let them pass or say hello. Take a bucket up the tree and go the bathroom in peace and quiet. If you’re lucky a deer will wonder by and you can nail a buck while relieving yourself. It’s really one of those things that has to be lived to appreciate.

It seems like every Monday someone comes up with a creative way to make work harder. 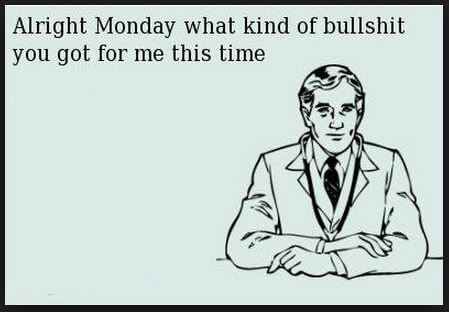 kicks off at an offsite camp. (I was wrong, it actually exists. I was pretty sure they just took the fat neighbor guy out and killed him but they actually did take him to a camp.) 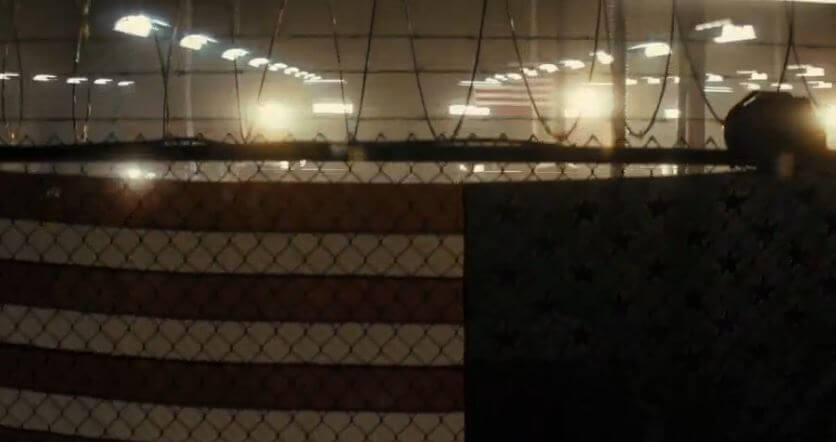 Doug (fat neighbor guy) is still alive, but his cell mate is doing his best to push him over the edge. After Doug gets pulled out of the cage the instigator moves on and asks “Who the hell are you?” and the camera pans down to show Nick sitting in the corner.

When we come back from commercial Ofelia is throwing bottles at the checkpoint and the young soldier she was making out with tries to protect her. She’s pissed, she wants her mom. Her boyfriend saves her, but the morale among the soldiers is faltering. 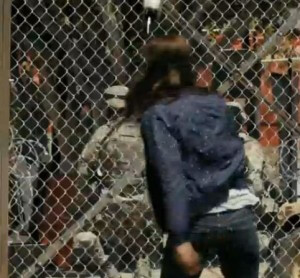 Inside the house Travis, Madison, an Chris are trying to figure out what to do. Chris wants his dad to go rescue his mom. They all fear that something bad has happened, they just don’t know how bad it is yet. Travis goes to talk to the lead soldier while Madison goes to a neighbor’s house. When she gets there she hears something banging downstairs. She’s smart enough to grab a knife and a flashlight at least, but of course the light isn’t reliable. When Madison opens the door Ofelia and her dad have boyfriend soldier duck-taped to a chair. He wants his wife back, she wants her mother back, and it looks like they are willing to get a little dirty to make it happen. The soldier tells the Salazars and Madison everything will be okay. Ofelia is waffling, she is trying to say her boyfriend doesn’t know anything while at the same time is willing to use her boyfriend as a bargaining chip. Mr. Salazar (The Barber) tells Madison to take Ofelia back to her house and not to let her come back. He’s going to make the soldier talk. The soldier tells Mr. Salazar he cares for his daughter. Mr. Salazar tells the soldier he lied to his daughter, he’s not going to let her boyfriend go without hurting him. As he’s talking he’s opening his kit and pulling out his straight razors. When we see the Barber again his shirt has blood on it and he’s cleaning blood off his straight razors. He’s skinning the soldier alive, making him talk.

While Madison is dealing with the Salazar Travis is trying to reason with the soldiers. For the second time the lead soldier mentions he can do what he wants because he has guns. Travis pushes too hard. They are going to take him to see the doctor.

At the medical camp Travis’s mom is actually helping people – but the doctor mentions that they started with seven nurses and won’t say what happened to the ones who didn’t get evacuated. I think the doctor knows.

As they are taking Travis to see the doctor the Hummer stops. There is a walker in a building. They pull out the 50 cal sniper and tell Travis he’s up. He’s got to take the shot. The soldier is pissed that Travis doesn’t want to take the shot. Travis is forced to take the weapon and look through the sights (and poorly – he puts his eye right up to it). He can’t do it through. I think she served him in one of the earlier episodes. 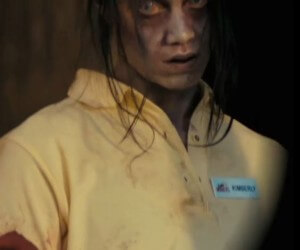 As Travis is rolling to the medical camp his ex wife is finding out what happens when soldiers get bit. As the doctor tries to deal with a bitten soldier Travis is left in the Hummer as the unit he is rolling with steps to help another unit pinned down in the local library.

His escort unit goes in and we hear gunfire and screams. The soldiers come out without their commander and tell Travis they will drop him off within a few blocks of the camp. They are abandoning their posts, they are going to go try and save their families. 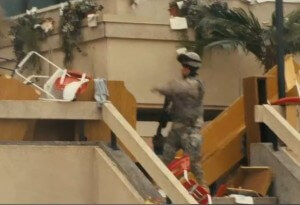 Outside Alicia finds Chris and tells him she needs to show him something. She’s found a mansion full of toys and other crap to play with. She plays dress up while Chris plays with a toy drone. When he sees her in a pretty dress he runs. Wuss. They then get drunk and destroy the house. Good ZA survival plan.

Back in the camp the soldiers come back and take Nick. He’s got a fever and the soldiers think it might be the infection. The same instigator who wouldn’t shut up when Doug was in trouble saves Nick’s ass – trading his personal goods to keep Nick in the cage with him.

And then Madison screws the Barber – by falling asleep and letting Ofelia go back to the house to see what her dad did to her boyfriend. To Madison’s credit all she asks is whether they got the info they wanted.

Somehow Travis makes it back to camp without an issue after the soldiers drop him off. He walks up in time to find out from Ofelia what her father is up to. Which transitions us to the Barber questioning the soldier who is now spilling his guts. The soldier tells Travis that Cobalt is an operation to evacuate and “humanely” terminate the civilians. It looks like the Barber did what was needed after all and saved their asses.

Back in his cell Nick and his new friend are talking. The Instigator tells Nick he’s now in debt to him. The Instigator knows the soldiers are leaving, he wants Nick to help him when he makes his move.

As Alicia and Chris are walking back to their house they see soldiers drive by, but they aren’t patrolling. They have stuff crammed in the back of their trucks. They are beginning to flee.

The episode ends with the Barber’s wife dying while Travis’s ex wife and the doctor are next to her. She’s rambling about the devil and her husband. She dies and Travis’s ex wife is forced to use a bolt gun to destroy her brain before she can turn. The doctor knows that everyone who dies becomes a walker.

The very last thing we see is Mr. Salazar walking up to a stadium. The doors are barred and locked with chains. The undead inside want out.