Watch the trailer, it basically the worst STD ever, and hopefully the trailer isn’t the best part.

Looking forward to seeing this when it comes out. As my brother put it, this movie better not Babadook me. And yes, I am using that movie as a descriptive word for a movie with a horrible, non original ending.

You can tell I’m about to get snowed in here on the east coast because I’ve been thinking a lot about surviving in the snow. I bought these Snowshoes for my son last year and it is amazing how much better you can move through drifts and deep snow when you were using a pair of

Snowshoes to spread your weight over a broader surface area. They take a little time to get used to, but if you had to bug out in the snow you will find out how important a pair of snow shoes are.

Most people are used to having plows clear the streets and everyone does their best to clear their sidewalks. What happens when the wind is blowing and the snow keeps pouring down and the drifts keep getting deeper and deeper.

You’ll be forced to go to ground if you don’t have a set of Snowshoes. And depending on where that is, you might end up surrounded by a horde when the storm breaks.

This girl has been voted onto My Team. Look at her handle that rifle recoil like a champ.

By the trilogy and find out!

I slipped and fell yesterday while taking the trash out. I put my arm out and caught myself and thankfully didn’t hurt my back. But my arm was sore. I didn’t break it, but I could have. Which would have been fine. I would have gone to the ER, gotten an X-ray and then a cast. But what would I have done if I was hurt after the zombies had destroyed the world?

packed away with my gear. The split holds the shape you bend it into and then there is an wrap you put on top of this. And hopefully it is a simple fracture and you don’t have to re-align any bones. In that case you are most likely still screwed. (sorry)

That started out as sweet and rapidly turned weird… 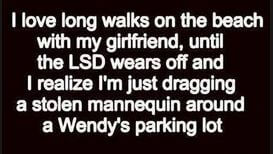 It is over eight minute longs but it is well worth listening to. We need more men like Senator Sheldon Whitehouse in congress. If we did more would get done and there would be honest conversation.

This Combat Tourniquet is one of those pieces of gear you hope you will never have to use, but if you do need it, you will be glad you have it. There are a hundred bad ways you could find yourself in need of a  Combat Tourniquet. You or a member of you party could fall and get speared in the leg or the arm in a major artery. You aren’t in a place you can stop and pour quick clot on the wound or take care of it in a more permanent way. So you strap the Combat Tourniquet on, strap the Velcro down and twist until the bleeding is down to a trickle. Then run like hell to get the injured person someplace you can do a more permanent fix on them.

Or someone could get bitten, and you have to do some quick surgery (1:12 if you want to jump to the surgery bit). And you better believe your are going to need a Combat Tourniquet if this goes down.

The thing I’m going to fix this Thursday is the Tax System. It is too complicated, it is too biased, and it is supporting a shift of wealth to the ultra wealthy  while strangling the middle class.

This is what you pay. I don’t care if it is investment income or money earned by working your ass off. Bankers don’t to pay less on the money they made in the stock market than on what I pay working like a dog with my hands.

You can still contribute to a retirement account pre tax with a cap of 20k per year. When you withdraw the money you pay the same rates below as if it were income. And of course there are still penalties for early withdraw.

So a person making 100K would see their current tax liability drop to $5150 dollars. There is no more filing jointly, head of household. This is per person with income.

Why do this? Because very penny you give someone making less than 100k per year goes right back into the economy. They spend it or pay down bills. Which will lead to more disposable income in the long run.

And it shifts the burden to the super wealthy who get way more utility out of the system than most of us. How many people making less than 30k per year get to fly a lot? But the wealthier do, and who pays for all that federal aviation dollars? And the list goes on and on. The more you have the more utility you get out of the federal infrastructure spends.

And lastly, but not completely thought out. The ability to “hide” assets offshore needs to be shut down. The how I don’t know yet, but when I rule the world I’ll have some smart people figure it out.