takes place on a post apocalyptic earth after aliens have landed, terraformed, and generally laid waste to human kind. Several wars have been fought, and the economy appears to have been put back into a mostly barter based system.

Our main characters, Jeb and Irisa are an unlikely pair. He’s a ex soldier who has taken the fierce Irathient child Irisa Nyira as his adopted daughter. Jeb is simple and violent, but also funny and loveable, giving balance to the raw aggression that Irisa has in spades.

If you liked “The Game of Thrones” I think you will loke Defiance. It has intrigue,  action, great characters, and keeps you wanting more. I know I’m looking forward to next weeks episode. 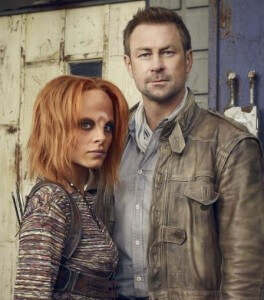