starts off with a strange zombie rat feeding scene. Has Rick totally lost it? The crazy woman with her husbands head had said he just needed a bit of fresh meet. Did he take that to heart in some weird way. Or is the crazy little girl feeding them?

Back in the prison Tyrese is trying to get lucky, and when he strikes out his lady friend hits the bathroom for some water, just missing Nick the Zombie in the process. Nick ends up stumbling by her cell door and falling on another helpless survivor, killing him with almost no sound. Now there are two walkers inside the walls!

Surprisingly, Nick the Zombie and his half eaten friend stay in their cell until daylight. I just don’t get why you wouldn’t have a fire watch. (You know, someone who’s job it is just to stay up and wake everyone else if something flickers to life – or unlife.)

When the cell block does explode in zombie violence there is panic and  gunshots. Michonne was just heading out, and when she turns around and races through the outer gate with Carl’s help they also let a few walkers in. She ends up wrestling and Carl shoots one of them when she kicks it off, but she appears to be hurt after she flips the second walker off and Maggie helps her in.

There is a brief and violent battle as the team clears the walkers in the cell block. Carol tries to save a man who was bitten on the arm only to find he also has a bight on the back of his neck. Amputating his arm isn’t going to save him. She seems way to calm as he tells her he feels it coming.

After it is all done the team realizes that some form of pneumonia killed the kid and they work on a plan to separate out the infected and those who might have been exposed. Anyone who dies of the flu is going to turn when they die. They somehow realize that is a form of hemmoraghic flu, and when the infected die they bleed from their noses, eyes, and mouths, like the zombies Rick has been seeing through the fence. 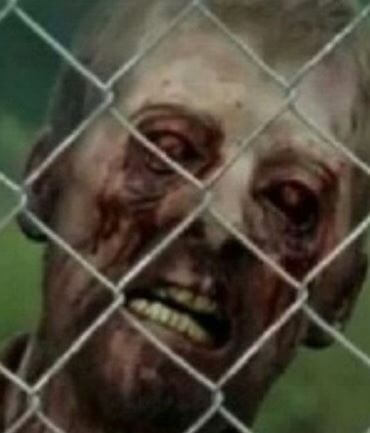 The walkers have been riled up by everything going on inside the prison and end up pressing so many numbers on the fence that they start to knock it over. Rick is forced to sacrifice his pigs to get them off the fence, but takes several sprays of pig blood to the face as he is slicing them open to draw the walkers off. Hershel already said that pigs are a commonly infected animal, and Rick just took several shots of blood to the face. Doh!

Afterwards he takes apart his pig pen and burns everything, afraid there might be infection there. Then, seemingly mildly broken, he gives Carl back his pistol and straps back on his own Colt Python.

In the last moments of Episode 2

Tyrese is bringing flowers to his lady love only to find a blood trail leading outside. When he gets outside he sees two bodies, both dead and burnt with gasoline. Who killed them? Tyrese wants to know so he can tear them apart for killing his lady love.