[REC]³ Génesis (2 Out of 5 Graves)
What do you do during a child’s 11th birthday party? Find a spanish langauge horror film with subtitles and watch it while all the kids are in the computer room playing games.

The movie starts with a very touching wedding and reception. An uncle has of course been bitten at his vetrinarian practice and shows up at the wedding with a bandage on his hand.

And surprise, surprise, he later turns into a zombie!!! I know, what a shock.

Pretty normal fair from there.  A few awesome lines from “Sponge John”, but other than that it wasn’t anything special.

I won’t ruin the end, but it was fairly telegraphed for the genre. 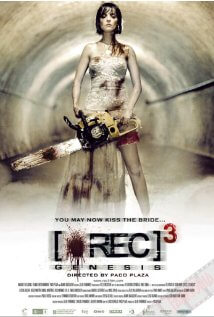