. They are well worth watching again.

The episode starts with an eerie scene of what we think was a werewolf hunter blowing his head off in a run down hotel in the 70’s.

Cut to the future, and the cross country team is pulling into the parking lot to spend the night. Styles, as always, makes me smile. 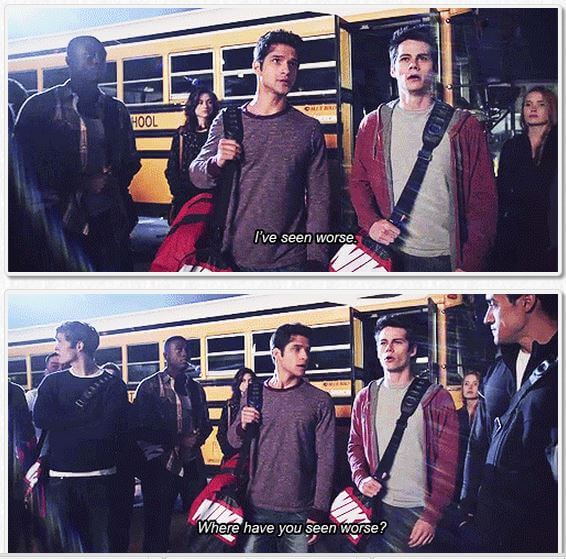 Thankfully Derek is alive (for now) and with the hot school teacher.

Back at the scene of the ambush Mr. Argent is walking through the fight, trying to figure out what happened. He clearly knows that Allison was there, and that she is staying silent about it, but she’s not telling him.

Lydia and team rapidly figure out that the hotel is a suicide magnet, and that the counter has gone up. They realize the place is driving the wolves nuts and save Ethan. Werewolves going crazy.

After saving Ethan they save save Boyle by using a road flare. (Stiles figured out that they snapped Ethan out of it after he got burnt.) Two saves down, but when they go back out into the parking lot Scott is standing in a pool of gas, depressed, and ready to go up in a ball of flames. He feels so guilty that he thinks Derek is dead, but Derek is getting some action in the mean time. Come on Allison, kiss Scott, and make everything better. But no, Stiles saves him. It was quite touching.