Episodee eight, Too Far Gone starts right off with the Governor pitching his plan to overtake the prison. He’s already got Hershel & Michonne, and he plans on trying to ransom them.

The Governor’s new girl, Lilly, doesn’t want him to do anything to try and take the prison, but he won’t listen. All he can see is his new little girl, and he will do anything to keep her safe.

Back in the prison Glenn and Maggie re unite while Rick and Daryl have it out over Carol. Daryl is mad that Rick kicked Carol out, but seems way more okay with it than I thought. Rick & Daryl go to tell Tyrese that some form of justice has been done.

When they find Tyrese they discover that he’s found a board with an animal nailed to it. Tyrese thinks it must be the same person who killed his two family members, and Rick tells him he doesn’t think so. Apparently they have someone with a serious mental defect in the prison.

Rick is just about to tell Tyrese about carol when the Governor uses his tank to knock on the front door of the prison. Oh crap, they have a tank!

Back at the river, Lilly let’s her kid play a few hundred feet from her and of course the kid ends up getting bit. How do you not keep your frickin kids close to you during the zombie apocalypse?

I can’t believe they killed Hershel! I loved that old man. He brought such a sense of peace when everything was upside down. I guess there is no presents now: 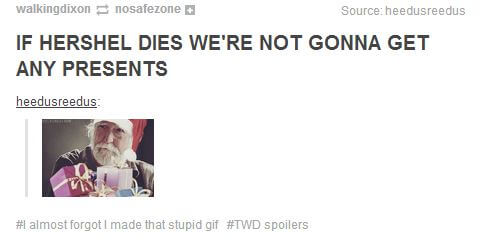