I’m happy to say this was the best movie I’ve seen so far this year. I thoroughly enjoyed it. If you haven’t read the book, I’d say wait and see the movie first. I think it will make it more enjoyable.

—There are spoilers below, so be forewarned.—

The movie starts off with Gerry Lane (Brad Pitt) and his wife Karin (Mireille Enos) at home with their kids, getting ready for school. As they are rolling through Philadelphia they get stuck in traffic, and that is where the movie has its rockets lit and doesn’t slow down until the very end.

Gerry and his family are stuck out in the midst of the initial outbreak, and after escaping in an RV they need to stop at a shopping market to get his oldest daughter an inhaler. The social unrest in the market was perfectly done. Everyone is out for themselves, social order has fallen apart. While all this is going on , Gerry’s old boss from the U.N. is calling him, telling him they will send an extraction. That they need him back.

After grabbing some supplies they go back out to the parking lot only to find their RV missing. (This was a tough decision in my head. Would you have left your family in the RV to guard it with the rifle while you tried to get supplies? Or follow the don’t split up rule?)

In any case, they didn’t split up, and end up running to an apartment building where they flee up several stories as the undead pour in from below. Gerry and his family take refuge in a Latino’s family apartment, and flee to the roof the next morning. Unfortunately, the undead attack the front door shortly after Gerry and his family head for the roof.

One of my favorite scenes from the movie happens as they flee up the stairs. Gerry shoots a zombie as it is on top of him, and he gets blood in his mouth. He runs the rest of the way up to the roof where his family is waiting for him. He tells them to stay away as he stands on the ledge, counting down from 10 seconds. (The people he’d watched turn all went quick. He figures if he doesn’t turn quick, he is good.) That is the way you take care of your family.

Tomas, the young boy from the family apartment races up to the roof, and the helicopter shows up just as the zombies overrun the rooftop.

The Lane family ends up on a navy destroyer, and the reason that Gerry is so important is rapidly laid out. They want him to head to Korea to where they got the first reports of zombies. He’s a skilled researcher and they want him to go with the key scientist to help find out what the hell is going on.

I loved the landing scene in Korea. The key scientist trips and blows his own head off. (Proving you are more dangerous to yourself than the enemy if you don’t know what your doing with a firearm.) And the plane is swarmed. Then out of the darkness the remaining soldiers from the camp clear out the zekes and take Gerry back to their bunker.

This is where Gerry finds his first clue as to how to deal with the zombies, he just doesn’t know it yet. (They did a good job not beating you over the head with the resolution.) The combat scenes in Korea were awesome. Gerry finds a breadcrumb here, pointing him to Isreal, the only state that built a wall and was at least partially prepared for the outbreak. My one complaint was when Karin calls Gerry as they are sneaking back to the plane. Really? She would know from his previous work not to ring him.  And he’d know to keep that phone off to save the battery.

After landing in Israel there is an awesome back story about why Israel built a fifty foot wall around a city to survive. And we get to see the hottest girl in the movie for the first time.

Segen (Daniella Kertesz) is assigned to Gerry’s protection detail. She is smoking hot. Her eyes are so intense, and there is something about the Sinead O’connor haircut that drives me crazy. 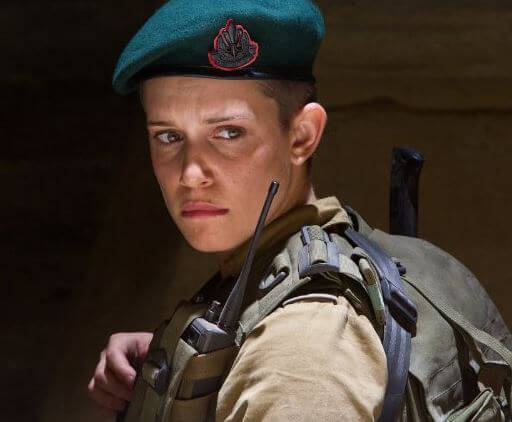 I can’t wait for the movie to come out for purchase so I can see more of her.

The fall of the Israeli city was epic and well done. Which led to the second minor issue with the movie. Would they really have build the walls with no watch towers every so many feet? But watching the zekes pile up and overflow the walls was another incredible scene.

Unfortunately Segen gets bit, but a quick thinking Gerry saves her by taking her hand off. She’s still hot, even in pain and with only one hand. 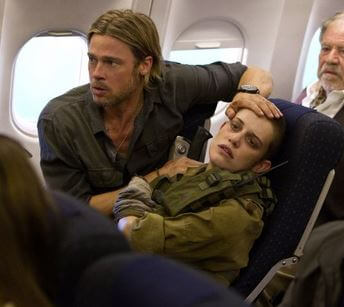 The plane they flee Israel on ends up having a zeke hiding in the rear, and Gerry and Segan just barely make it off the plane alive.

This leads to the final scenes of the movie at a World Health Organization infectious disease lab. The last thing that was mildly annoying happened here. After Gerry puts the pieces together and figure out a possible path to keep the zombies from attacking, they need to go to the infected part of the building to get some supplies. The head of the lab, Gerry, and one handed Segen end up making the run.  Really? You send the one handed girl? Still, I shouldn’t complain, every scene with her in it was worth it!

Gerry takes a risk in the lab at the end, but it pays off. The final scenes are Gerry and Segen making their way to a refugee camp where the rest of the family is staying. I really liked how Segen and Tomas stayed with the family. I’d keep her too.

The short of it is, it was a great movie. Can’t wait to watch it on DVD when it comes out.

Definitely the best movie of year so far. 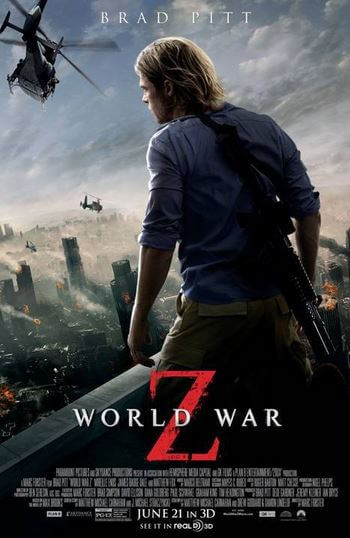